Sometimes, looks can be deceiving. There are kind-looking people with a heart of stone while there are evil-looking people who are kind-hearted. Take the case of this man on a Facebook post that went viral recently. Looking at the picture of the man, everyone will probably think that he’s a bad person and will even be mistaken as a snatcher or something. He has a lot of tattoo in his body. But he proved to everyone behind that look is a man who has a heart for the needy.

According to the Facebook post, a very hungry child was seen roaming around a convenience store asking for alms. Instead of sparing the child some coins or food, the security guard drove him away. He told the child that beggars are not allowed there. The man was passing by the area at that time and saw what happened.

After telling the guard that he shouldn’t be dealing with the boy that way, he brought him to a nearby food court and ordered some food. He accompanied the boy until he finished his food. The man seemed to have just gone out for an errand because as seen on the post, he was just wearing sando and shorts. After the boy has eaten, the man gave him a small amount of money which he can use to buy medicine.

The act of the man earned the admiration of the netizens. After all, it’s not very often that you will see anyone doing this kind of deed. Considering his looks, his gesture caught everyone by surprise. 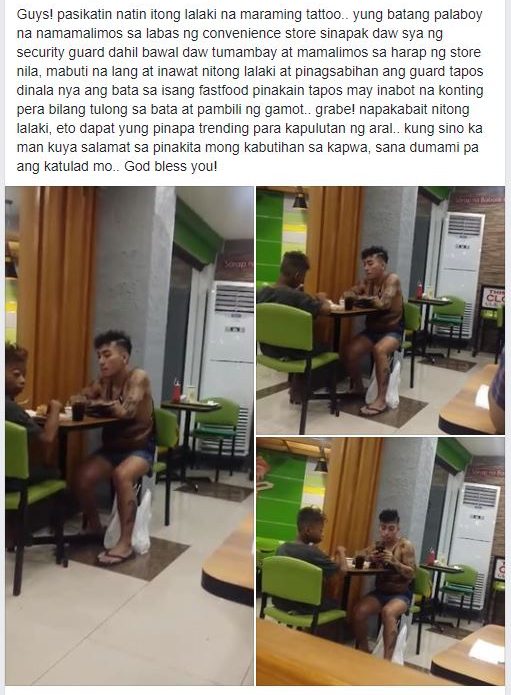 The Facebook post had already gotten more than 380 comments, 6,200 shares, and more than a thousand shares. The netizen who posted this incident further said that stories of this kind should be the one that gets noticed by the public because it will serve as an inspiration and leave a moral lesson to everyone.