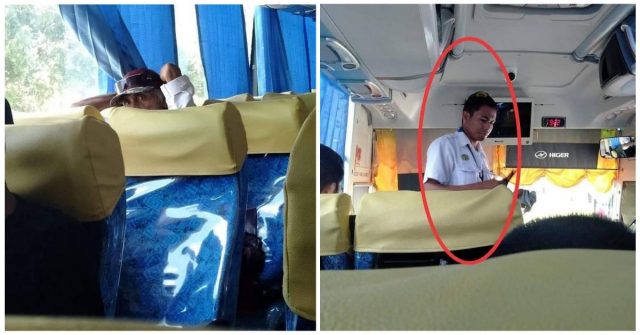 Nowadays the usual news that you will hear in this country are about crimes, drugs, accidents, and maltreatments even on the elderly. More often than not, it looks like humanity has lost good bone in them. So, it’s a refreshing respite when you hear about people doing good deeds to someone who’s not even related to them. It would make you feel like there’s still hope for mankind. Just like in the case of this bus conductor who paid for the fare of a senior citizen who doesn’t have enough money.

As narrated in a post on the Netizen of Sergio Osmena Facebook page, the senior citizen asked the conductor if he can ride the bus even if his money isn’t enough to pay for the bus fare. The post was originally from a certain Reme. While most bus conductors or driver will not allow the old man to ride the bus and would probably say bad words to him, this conductor didn’t even think twice and allowed the man to ride the bus. He told the senior citizen that he will give him a ticket and there’s no need to pay for it. The old man was more than thankful to the conductor and was even teary-eyed because he will finally be reunited with his family.

According to the post, it’s a Yellow Bus Line Marbel, Koronadal – Tacurong, Sultan Kudarat route. The bus fare ranges from Php326-419. This is not a small amount of money for the conductor but his good heart wanted to help the old man. He could have bought food for his family with that money but helped someone in need instead. The netizens highly praised the man’s good deed. His picture was posted in the desire to praise him and to inspire people to also be compassionate to the needy. The post got more than 2.4K comments, 26K reactions, and 8.6K shares.

How to Apply for OWWA Scholarship