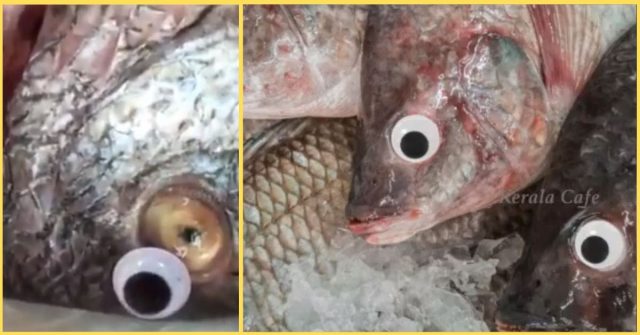 A store in Kuwait was ordered to close shop after it was found using plastic eyes to keep fish looking fresh. They have been doing this to ensure that their customers will buy the fish even if it isn’t fresh anymore. As can be seen in the pictures, the fish seller had stuck the plastic eyes on the yellow eyes of the fish. A customer noticed this so he/she removed the fake eyes and true to his/her hint, it was really fake.

The video showing the fake eyes and its removal went viral on the net and when this reached the Ministry of Commerce and Industry of Kuwait, it instantly ordered the closure of the store. It’s common knowledge that when the eyes of a fish turn yellow, it is not fresh anymore and had probably been rotting for two days or more according to the Gulf News. Just recently, there was a report too about a vendor who inserts fingernails in the fish to make it weigh heavier. This was followed by sticking plastic eyes.

Life is hard nowadays and every cent counts. Consumers work hard to have enough money to put food on the table. Having said this, it’s only fair to give the consumer his/her money’s worth. This article should serve as a warning to everyone to be vigilant whenever you’re buying fresh goods because many vendors are very dishonest nowadays.

All that matters to them is how they’ll be able to earn big money that they don’t care anymore if they sell something that will harm the consumers. For the sellers; try to change before it’s too late. Always remember that whatever bad seed you sow in life, it will definitely come back to you.

Graduates with Honor can be Qualify in Civil Service Eligibility?