Homer Menzi is a farmer in Tuba Benguet. He became trending on the net because of the giant white ube that he harvested. The root crop weighed 28 kilos and measured 6 feet. Homer is now dubbed as “ube man”. He revealed that they have been planting in that area before but they were only able to dig it recently because they went to Agoo. This is why it has grown so big. His cousin, Jayson Pacio, said that it was not the first time that they had harvested a big ube. They had harvested a 13-kilo ube in the past. 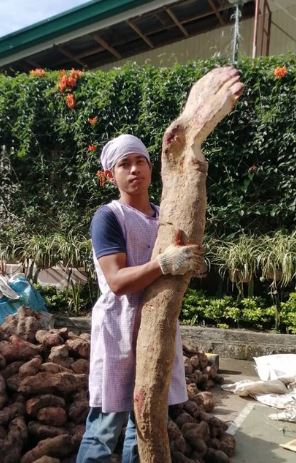 His cousin said they were happy with their harvest so they posted it on social media. An Agricultural technologist in Tuba, Benguet, Michelle Saingan, said that fertile and good soil is the secret in growing a giant ube.If the soil is soft, ube will grow better.  She further said that the longer ube stays in the soil, it will shrink or rot. The agricultural technologist also said that the giant ube should be subjected to more study.

Homer had already sold the giant ube to a pasalubong store in Baguio City, Good Shepherd. The purchasing officer of Good Shepherd, Michael Amagod was stunned with the size of the root crop. He said that aside from the fact that the farmers of Benguet are organized, they are also planting seedlings with the best quality. This is probably the reason why they were able to harvest such a giant ube. Amagod added that he was surprised upon seeing an ube as big as that. The giant ube astounded the neighbors of Menzi and a lot of netizens who were very impressed with his harvest. Many photos have been circulating online and it already became viral on social media.

Instead of Having a Reception, This Newlywed Decided to Donate Groceries and PPEs After Their Wedding Ceremony.

Netizens Praise Single Dad for Bringing His Kid to Work

Japan in Need of Nurses and Caregivers, Application is Until April 30

Know what are the Filipino Employees Benefits in Working to Japan