Everyone knows that Vic Sotto has several children from different women. Unlike the comedian, most of them have stayed away from the eyes of the movie-going public. Although they are from different mothers, Vic Sotto never missed being a good father to them. Here are his children; 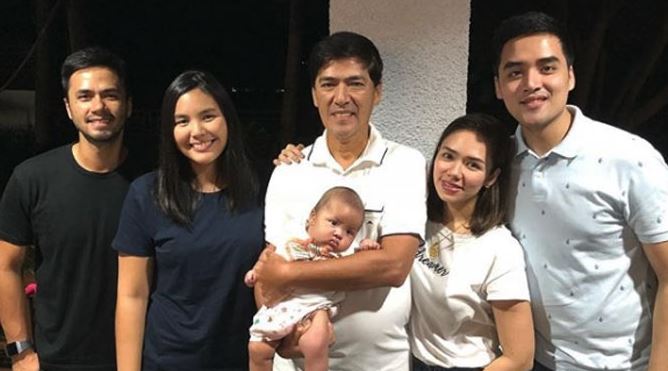 She is Bossing’s first-born child to former wife, Dina Bonnevie. Danica was born on May 9, 1983. During her teenage years, she gave showbizness a try. One of her projects was a sitcom with her dad, Daddy Di Do Du. Danica eventually left showbiz until she met and got married to her husband, Mark Pingris.

She’s now busy as a mother and wife. Mark shared that she’s doing a good job as a mother to their kids and wife to him. He said that the learn a lot of things about each other as the years go by considering that they came from different worlds. Mark, as everyone probably knows is a famous professional basketball player. He further added that at first, he was quite afraid and shy of Danica’s family because of their family standing but through the years, he was able to adjust well.

Danica once tried to put up a restaurant but it wasn’t successful and this broke her heart for a while. Good thing, Mark stood by her side and explained to her that despite what happened, she is still very much blessed.

As of to date, Danica is a Youtube vlogger and a host of a cable lifestyle show aside from handling other business ventures.

Oyo is Vic’s second child with Dina Bonnevie. He was born on January 12, 1984. He had followed his father’s footsteps at an early age and was known as Benok in the “Ok Ka Fairy Ko” TV series. Upon reaching his teenage years, he had become a favorite leading man in TV series to the likes of Marian Rivera, Nadine Samonte, Iya Villaniea, among others. He had also been one of the regular casts of the MMFF entries of his father, Vic. As of now, he is one of the casts of GMA-7 series Daddy’s Girl with daddy Vic and Maine Mendoza.

He is not as active on showbiz as before because he had been concentrating on his family. He’s married to Kristine Hermosa and they have four kids now. Aside from his Daddy’s Girl, he is also busy organizing events for bike enthusiasts and he also has a Bicycle and Coffee shop which can be found in Alabang. He and Kristine are also very active in their church.

He is Vic’s child with former Eat Bulaga co-host, Coney Reyes. Unlike his elder siblings, he had stayed away from the limelight and concentrated on his studies instead. He graduated from the Ateneo de Manila University in 2011 with a degree in Bachelor of Laws and had his Masteral Degree at the Ateneo School of Government in 2018. His father describes him as intelligent and industrious.

In 2016, he became a member of the Sangguniang Panlungsod or City councilor of Pasig. He is now the mayor of Pasig city after winning in the 2019 local elections. He was able to topple down the political dynasty of the Eusebios in Pasig.

Paulina is Vic’s fourth child. Her mother is Angela Luz with whom Bossing had a short-lived romance. Paulina’s favorite sport is golf; just like her father’s. The father and daughter share bonding moments playing golf. Vic supports his daughter’s passion for golf.

Paulina is also an artist and she got this talent from her grandfather, Arturo Luz who is a National Artist. Vic had advised his daughter to follow the legacy of her grandfather. Paulina’s no. 1 supporter is her dad and this is very obvious in the Laguna house of Pauleen and Vic where the artworks of Paulina are displayed.

Tali is Vic’s youngest daughter with new wife, Pauleen Luna. She is the bundle of joy of Bossing and even her siblings are very fond of her. Being still a toddler, the proud parents have yet to see her talents though Vic and Pauleen are very proud because of her smartness.

Failure to Provide Child Support Can Now Be Considered As Child Abuse and May...

Nurse who assisted a woman giving birth on the road inspired many netizens and...

Old Man Receives a Free Helmet and Vest for Not Wearing Any Protective Gear...