Sponsored Links
Home Entertainment Robin Padilla lost his Temper after the Basher Comments to his Pregnant... 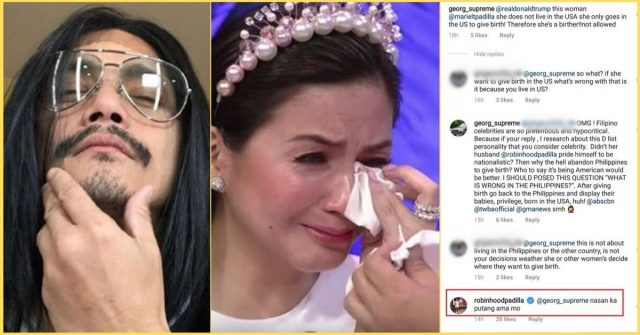 There are times when you will lose your temper especially if a bad comment is regarding a loved one. This is exactly what happened to the Bad Boy of Philippine Movies, Robin Padilla, when a netizen made a sarcastic comment because of Mariel’s plan to give birth in the U.S. Apparently, the netizen said that Mariel Padilla only goes to the U.S. to give birth and as such, she can be called a birther and that is not allowed. This must have gotten to the nerves of Mariel’s husband so he made a nasty reply to the netizen.

The screenshots of their exchange of heated words went viral on the net. Another netizen asked what’s wrong if Mariel will give birth in the U.S. and the one criticizing Mariel said that Showbiz personalities in the Philippines are pretentious. He also questioned why Robin’s wife would give birth in the U.S. when all the while; he had been claiming to be nationalistic. He wonders what’s wrong in giving birth in the Philippines to which someone replied that there’s no issue whether someone who lives in another country would decide to give birth elsewhere. It’s her prerogative to decide where she wants to give birth to her baby.

This is one of the negative effects of social media. Even a simple issue of a woman giving birth will become sensational. {source}

Proposed Bill: Spouses of OFWs to Considered as Solo Parents and Entitled for Benefits