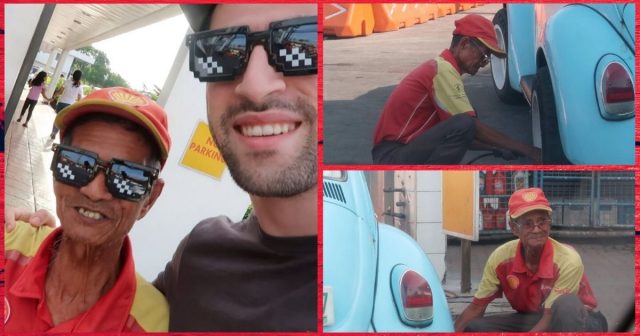 Vlogger Basel Manadil or better known as The Hungry Syrian Wanderer is at it again. This vlogger is known for giving gifts to deserving Filipinos unexpectedly. In the past, he had given his staff a house so she won’t have to work abroad and be away from her family anymore. This time around, the recipient of the unexpected gift is a senior citizen who has been working at a gas station for 47 years now. Basel surprised the 68-year-old man who despite his age continues to work.

The vlogger said that he saw the post o Facebook and after reading the story of the senior citizen, he instantly decided to go there. He saw the man working despite the hot weather. Kewel Oro was the one who posted about Lolo Bro and it went viral on social media.

Oro said that Lolo Bro had already resigned from the gas station but still goes there to offer his services so he can earn money from tips. The Syrian said that he used to go to the gas station during the time he was still studying and he was so glad that he and Lolo Bro will see each other in this situation.

The Syrian asked Lolo Bro to check the airs of his car then surprised him by giving him a tip of Php1,000 for each tire. But that’s not all; he also went with Lolo Bro in his house. He gave him rice and grocery items. Basel also thanked the company for allowing the senior citizen to continue working there despite his age. He also shared the inspiring story of Lolo Bro who for him deserves praise for being hard working. He added that simple people like Lolo Bro should be admired.