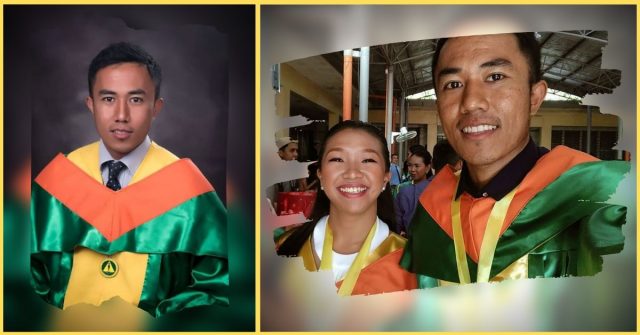 You would often hear parents tell their children to finish their studies no matter what the circumstances are because that is one thing that no one can take away from them; education. For poor families, it’s the only thing that they can impart to their children which they can bring with them wherever they go. But sometimes, due to the hardships of life, it may take a while before poor parents’ children may finish their education. When putting food on the table is hard enough, education sometimes takes a back seat.

Bryan Eric Olitoquit comes from a poor family in San Fernando, Camarines Sur. His father is a farmer and his mother is a barangay secretary so it took eight years before he was able to finish college. He took up Agricultural Engineering at the Central Bicol State University and he went viral after passing the Board Exam and getting the Top 6 spot.

The Top 6 board passer admitted that it wasn’t easy for him because he also had some failing grades. He also had a hard time doing his thesis. Despite all these, he didn’t stop working to achieve his goals.

His course would only take five years normally but given his situation in life; it took him eight long years to get his degree. He never gave up and just kept on trying even if finances were hard.

He had always believed that education will be his key to success and this will be the way to help him improve the life of his family. His story is truly an inspiring one. It only goes to show that when someone is eager to make his life better and achieve his goals in life, it’s possible and nothing or no one can stop him.

Senator Sotto pushes for the approval of the 14th Month Pay in the Private...