Palawan is like heaven on earth. If you want to go away from the busy and noisy life in the Metro even for a while, this is the perfect place. It’s like getting lost in paradise and hoping to never find the way to go back to the normal life. There’s something in this place that will give you a feeling of calm and peace. Seeing the rich greeneries and crystal clear water will make you feel one with nature.

It’s no wonder that Derek Ramsay and family chose this place to nestle their glasshouse. The family has fallen in love with Palawan that they have two islands here and have built a beach house too. The enchanting glasshouse of the Ramsay family is located in the town of San Vicente and built in 2013. It was what you can call as a family project. Derek’s dad was the one in-charge with the structural design while Derek, together with his Mommy Meldy worked in polishing the house’s interiors. It’s a glass beach house and a perfect getaway where the family and guests can take a good view of the island paradise. It’s furnished with pieces from well-known designers. 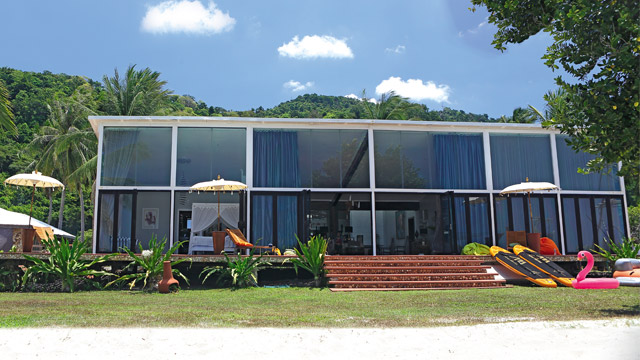 Looking at the house from afar, you will see that it’s very spacious and airy. Derek said that yes, they could have made a concrete house instead but why do so when it’s already what they have in Manila. Besides, one of the main reasons for building the house is to get away from Manila feel so this beach glass house came to mind. They want it to be homey with a feel of the beach. 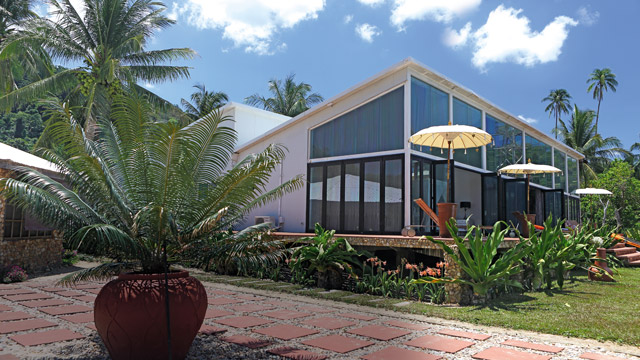 Since Derek’s dad was the one in-charge with the structural design of the house, he didn’t use the sliding glass door which is quite common. Instead, he invested in steel doors with tempered glass. This can be folded and imported from Australia. The mother and son tandem, on the other hand, took charge in choosing the furniture and art pieces in the house. The outdoor area has umbrella accents from Bali. Derek and his mom collaborated on the overall interior design of the house. They wanted it to have that Asian feel but with a beach twist. 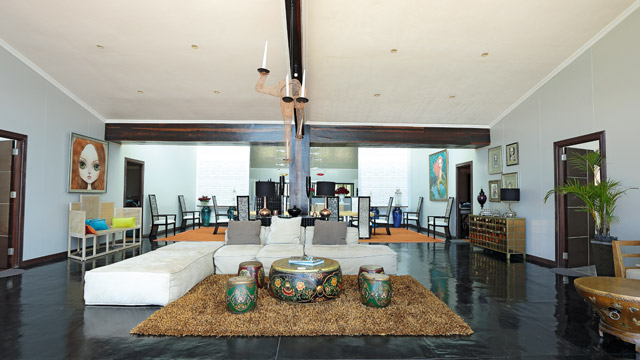 Once inside the living room, you will feel the Asian vibe. The sofa is placed where it can have a view of the beach. This sofa is an investment itself, coming from an Italian brand. The lamp is by Kenneth Cobonpue of the Limbo Acrobat. The lamp is an eye-catching piece and so is the wooden seating piece designed by Derek’s mom. The set of convex mirrors above the seating piece was designed by Ito Kish. Another Ito Kish creation in the house is the black Georgia chair. The Tibet temple drums add to the Asian feel of the house. Derek bought the drums from an antique shop in Bacolod. 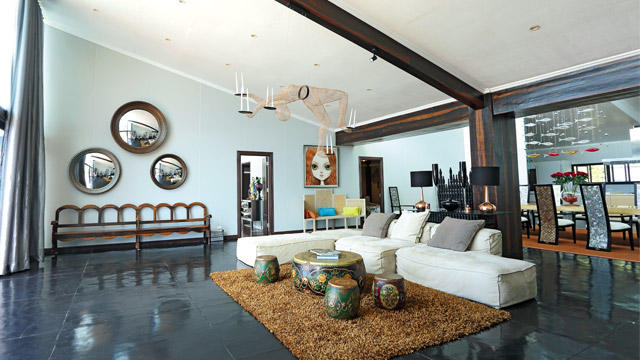 Paintings and other designer pieces complete this spectacular house. There’s a Dear Bella painting by Mayi Penaflorida hanging on one wall. Beneath it is a Basilisa lounge by Ito Kish. Guests will surely love to spend a few moments on this spot. A charming console stands proud in one corner. Displayed above it are the other works of Mayi Penaflorida. 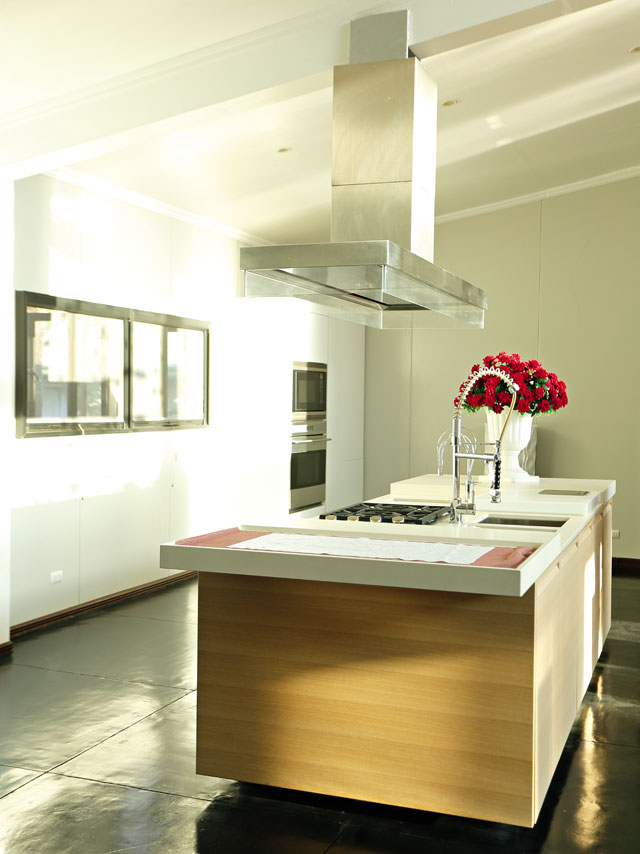 The pieces of furniture in the dining area are obviously well-thought-of by Derek’s mom. The dining chairs were bought from Cebu and the backrest showcased the 8 kinds of shells that can be found on the shores of Palawan. His bedroom is loaded with several pieces made by Kenneth Cobonpue and Ito Kish; two of his favorite designers. The Yin and Yang bed is the star of the room.

The Little People hanging lamp & entertainment console is by Cobonpue while the Concesa cabinet is by Ito Kish. These blend well with the artworks on his wall. 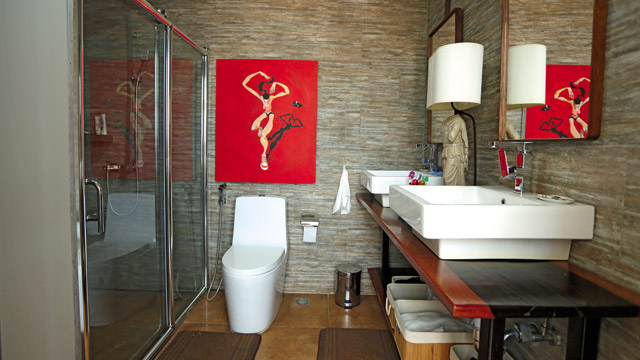 His bathroom is simple with artworks that are dominated by red color. The tiles are similar to the ones you’ll see in resorts. There’s a shower enclosure and it’s very clear that the owners added many interesting accessories and artworks to make it stand out. 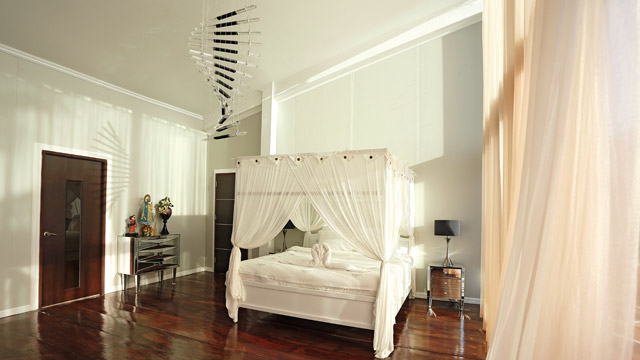 Although the bed isn’t complete yet, it is already stunning. Mommy Mely said that she has yet to add a rug. The four-poster bed from Bali adds a whimsical feel to the room. Adding a cohesive look to the room is the striped sofa and the chandelier. These pieces add a modern touch to the room. 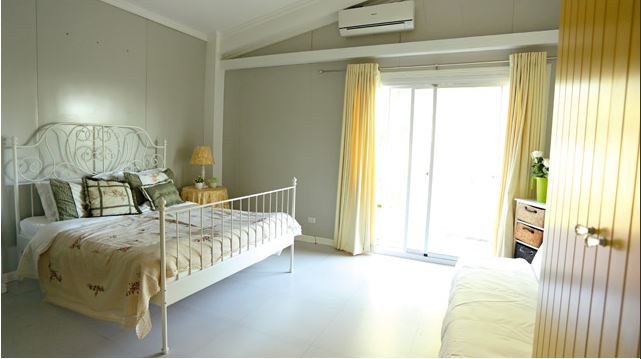 This room has a country vibe as it is surrounded by lively green and yellow color. This is the room of the youngest sister of Derek, Natala. It has an elegant chandelier and a fascinating bed. The view outdoors adds to the coziness of the room.

There’s a small vanity corner which incorporates the final appearance of the room. A pale green storage ottoman was added instead of putting a big chair.  All image credited to Ocs Alvarez/ACME Visual Productions.

Despite of being Rock Icon in Philippines Bamboo Become Busboy and Bookstore Clerk in...

Teacher Trending After Climbing Up to Tree Just to Find Signal for His Online...