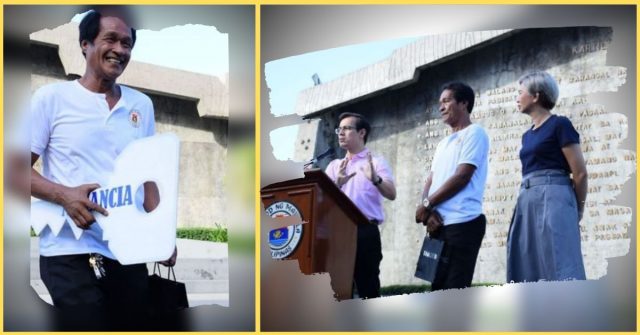 Mang Melchor is a janitor in the City of Manila. He has been for 33 years. He lives in Cavite but only comes home every weekend. Because of that, Mang Melchor stays in the city hall during business days. It’s his way of saving some cash to give to his family. The City of Manila acknowledges this. And, with the help of the signed Administrative Order No.29 of President Rodrigo Duterte, Mang Melchor now has a house! Yorme Isko Moreno announces this on his Facebook page and happily tells Mang Melchor.

Yorme Isko praised Mang Melchor for his services to the city. The mayor said that Mang Melchor will receive a free “housing project” and a Smartphone. He finished his speech by saying “Mabuhay po kayo” to Mang Melchor. This housing program is an initiative of the city. This is also under the Administrative Order of the President of the Philippines. The President signed it last January 10 of this year. The order beneficiaries include government employees under the “job order” and “contractual” categories. The largest amount is Php3,000.

What Mang Melchor received is priceless! Plaques of recognition can only go so far. But for someone who needs extra money to get by, some help like free housing is very good. This is a great start of the year for Mang Melchor and his family. Yorme Isko is keeping up to his promise of a better City of Manila. And, what a better way to start the year by giving to the people who keep this city going! Thanks to the President and Yorme, Mang Melchor now has a new home. Also, let us not forget to thank Mang Melchor for his exceptional job! What do you think of this story?