Starting school year 2019-2020, the school opening will be on August. This is based on the order of CHED (Commission on Higher Education). J. Prospero E. de Vera III, CHED OIC, issued a memorandum dated April 5, 2019, stating that all the (SUC) State Universities and Colleges and (LUC) Local Universities and Colleges will have their opening of classes in August. This will synchronize the Academic year to Fiscal year.

The memo reads; “Pursuant to the pertinent provisions of RA 7722, otherwise known as “Higher Education Act of 1994″ and CEB Resolution No. 142-2019, all State Universities (SUCs) and Local Universities and Colleges (LUCs) are enjoined to synchronize its respective Academic Year (AY) to a Fiscal Year (FY) starting FY 2019 and to ensure that starting FY 2020, all SUCs and LUCs have synchronized their academic year to a fiscal year.”

The school opening new schedule still follows RA 7722 Section 3 that states higher education schools should start the school year every first Monday of June and not later than the last day of August. Chairman de Vera explained in 2018 that the decision to make this change is to help in facilitating an easier implementation of the Universal Access to Quality Tertiary Education Act that is under the cah-based budgeting system. He stressed out further  that the academic and fiscal year were not aligned thus the implementation of a free higher education law would be greatly affected by this kind of budgeting system. 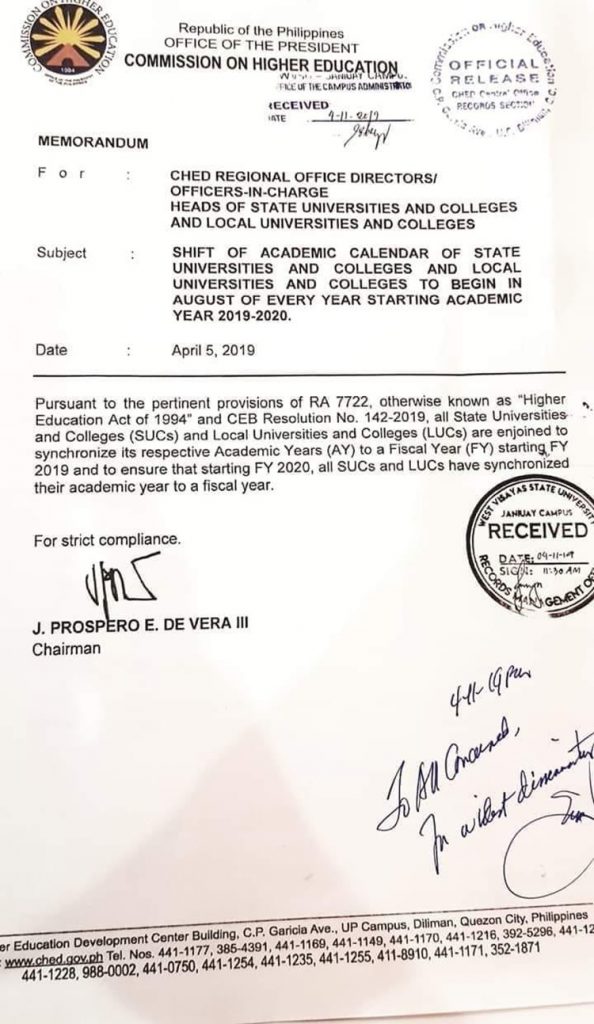 Read: How to Apply for OWWA Scholarship

Under the cash-based budget system, government agencies are obligated that they spend the allocated funds and deliver projects within the same year. According to de Vera, there had been difficulties in the schools’ reimbursement because schools start in different months. With this new school opening, all the necessary reimbursements will be done by the end of the fiscal year. He also said that the school opening’s synchronization is very much needed because some LUCs and SUCs have started opening of classes in August. It was noted by CHED that around 78 LUCs and 112 SUCs will benefit from the free higher education education law. This change in the school opening may get different reactions from students but will definitely help in the proper implementation of government requirements.

An Abandoned Football Field Becomes Viral After a Farmer Turns it Into a Vegetable...

Netizens Wowed in a New Tourist Attraction with “Sea of Clouds”