In a recent Instagram post of Megastar Sharon Cuneta, she posted a picture of the “yayas” of that take care of her and her children. The picture showed the “yayas” wearing their uniforms and they were eating on the same table with two other ladies wearing a plain black t-shirt. The “yayas” and the other two staff appear eating together in a restaurant. The Megastar probably has no ill intention with the said post but the netizens have something to say again.

One netizen commented that it’s not good to see them wearing uniform when they are in public. Another one commented that they shouldn’t be referred to as “yaya” but should be called as a “guardian” instead. The Megastar explained her side regarding the controversial post. She said she’s sorry if the netizens misinterpreted her post.

She further explained that when she takes them with her abroad, they are not asked to wear uniforms and they are given their allowance. It’s up to them if they want to save the allowance or they want to spend it. They are also allowed to wear whatever they choose. The Megastar said that those who didn’t find it appropriate that Sharon’s “yayas” are wearing the uniform should talk to them and know how the Megastar treats them.

For the Megastar, “yaya” is a loving term that’s why even the household helpers are called that way. She even joked that it could be a bit awkward if instead of calling the “yaya” as “Yaya Hazel”, she will be called “Guardian Hazel” instead. 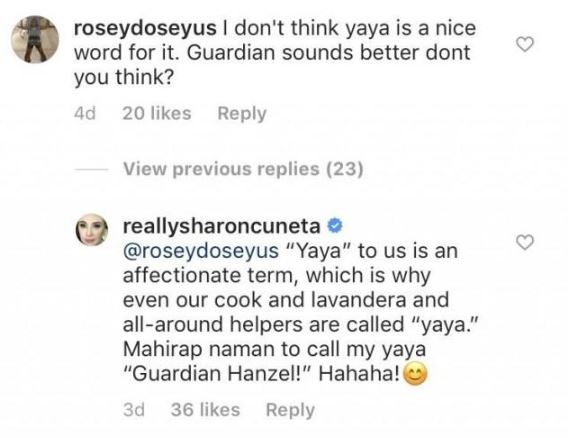 She further narrated that even her driver of 30 years, Dodong, is also brought abroad just like the “yayas”. On the last note, Sharon said that they may be wearing uniforms but they earn more than others do. According to the actress, wearing a uniform will save time and money for them. Uniform will not define a person.

Travel Agencies Tasked for the Processing of Korea Visa Application