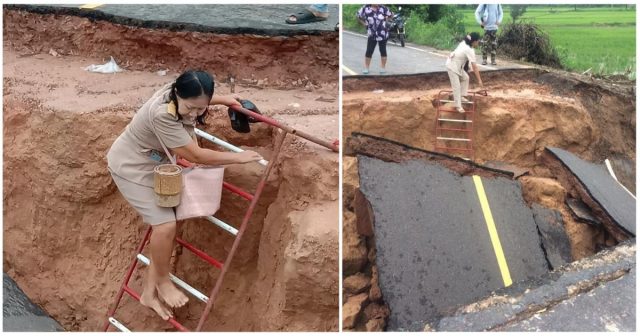 Being a teacher is not an easy job. It would take a lot of patience and perseverance to become and continue being one. A teacher, 2nd to the parents, molds the children into becoming great people. They also instill good values to their students so that they will grow up to be humans that know how to respect rules and other people. A teacher’s job is tough for it would be like bringing up a child of your own and in their case, hundreds of thousands of kids pass their lives.

Just recently, a Facebook post about a teacher in Thailand went viral after seeing her crossing a severely damaged road. She didn’t want the kids to miss a lesson and so she did that unbelievable act. There was a landslide that affected the road and caused a portion of it to break down, making it impassable. Na Udom, along with other places in Thailand had been submerged in flood for several days because of Tropical Storm Podul. The typhoon damaged many roads.

The damaged roads, however, didn’t stop this teacher from going to the school so they will be updated with the lessons they are supposed to tackle inside the classroom. The teacher bravely risked her life by going down on one side of the road through a makeshift ladder and going up again through another ladder. In between climbing down and up the stairs, the dedicated teacher had to carry her bag, shoes, and another bag loaded with school supplies while walking to the collapsed portion of the road which was quite slippery.

After that death-defying act of the teacher, she still has to walk a few kilometers before reaching the school which might have also been damaged by the flood. Looking at the photos of the collapsed road, it might take several months to fix it. The road has no iron bars and a very thin asphalt; the reason perhaps why it had been easily damaged by the typhoon. The unnamed teacher and other teachers as well will have to endure crossing the road to make sure that they provide their students with education.

PhilHealth Benefits Many People Don’t Know They are Qualified

4 Easy Steps In Applying For An Online SSS Salary Loan