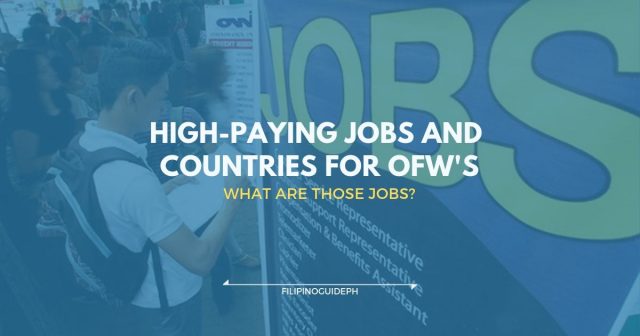 Many Filipinos believed that working in foreign countries is the only way to give their families in the Philippines a better life and future. But we all know that being an OFW entails a lot of sacrifices and being away from the family and loved ones for years. Still, many are getting their way to leave the country and work abroad.

The Philippines provides the biggest supply of skilled professionals and manpower to the different parts of the world. Many Filipino professionals were enticed to work overseas because of the appealing career path and better employment. Every year, hundreds of Filipino skilled workers and professionals have been applying for work abroad.

Based on the data provided by the Philippine Statistics Authority, as of September 2018, the number of OFWs working anywhere in the world was approximately 2.3 million. The Overseas Contract Workers comprise 96.2% and the remaining 3.8% are working without a contract.

According to the latest survey, the most compensated job of OFWs is in the field of healthcare including nurses, pediatricians, doctors, and veterinarians. Other industries that offer a high salary for OFWs in the Middle East are in engineering, restaurant service, and general work.

In the Asia-Pacific region, skilled workers are in-demand that include carpenters, caretakers, and household service workers. IT professionals are highly needed in Malaysia. In manufacturing/production industry, technical operators and technicians are needed. In fact, Japan and Taiwan are continuously hiring welders, machine operators, and factory workers.

See also: Things to Remember by an OFW Returning For Work

In the United States, most sought jobs are in the engineering, restaurant service, sea-based engineering, and general work industry.

As of 2018, the top 10 countries where OFWs were deployed include Taiwan, Malaysia, USA, New Zealand, Bahrain, Oman, UAE, Kuwait, Saudi Arabia, and Qatar. Saudi Arabia has the greatest number of OFWs being deployed by the POEA.

Estimated number of Filipinos overseas for the semester ending June 2015:

Finding a job in foreign countries is not easy. It takes a lot of preparation, resources, and effort. Applicants need to deal with the difficult and tedious process. That’s why if you are planning to work abroad you should know where your profession and skills are in demand.

Your skills and expertise partly determine your career path. You can use your skills to find a high-paying job either local or overseas.

See also: Proposed Bill: Spouses of OFWs to Considered as Solo Parents and Entitled for Benefits

However, before making your decision to work in a foreign land you need to think about the cost of living and not just the salary. That’s why if you’re earning a 6-digit salary in the Philippines, you should think many times before deciding to work abroad. Keep in mind that working as an OFW is just a short-term goal. As much as possible, you must save a lot or start a business while you’re still an OFW. This way, you will have a fall back once you retire as an overseas worker.

Travel Agencies Tasked for the Processing of Korea Visa Application